My first Willamette Writers conference was a series of hilarious, exciting events and a bona fide success! I spent three days soaking up knowledge, meeting enthusiastic people and reconnecting with what I am most passionate about: storytelling. 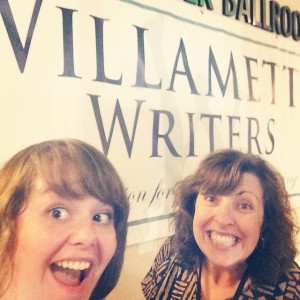 My partner-in-crime @kimliterally and I spent the weekend at the Double Tree, being silly, drinking hotel coffee and finding inspiration in crowded conference rooms. It was perfect.

For some ridiculous reason, when I signed up for the conference several months ago, I thought I would be ready to pitch “Hello, Harbor” to agents. I chose two agents– one of which had to be replaced at the last minute– and promised myself I would have a solid draft ready by August 1. Of course, I did not have a solid draft. In fact, I had been struggling to write all summer. Oh well, I would figure it out.

We arrived late on Friday morning and Kim still had to register, so I hung out by the registration desk and thumbed through my conference materials. I casually turned my name badge over to see when my pitch appointments were scheduled and I almost fainted. I had 40 minutes until my first pitch and the second pitch was scheduled shortly after that. Holy shit!  I thought I would have at least a day to craft my pitch and run through it a couple times in my hotel room mirror. All I had were handwritten notes from a pitch class I took a year ago. We sat down in Larry Brooks’ Story 101 workshop, and I couldn’t pay attention to anything but the clock.

When it was time for my pitch, I dashed out of the conference room and stopped by a grand piano to collect myself and put away my notebook. I pulled my water bottle out of my purse to find that its contents had pooled at the bottom, with my notes, my wallet, my Kindle and everything else I owned. I did not have time to do anything but laugh. Harbor was making herself known. So with a purse full of water, I walked down the long carpeted hallway and waited outside a ballroom with 20 other hopeful authors.

Agents were arranged by last name and sat at little two-top tables with glasses of ice water and stacks of business cards. You only have 10 minutes to convince a stranger to read your book. A stranger that hears more than 10,000 similar pitches every year and only says “yes” to five percent. I walked into the room, found my first agent, introduced myself and said “do you want me to just start?” I can’t remember exactly what I said but she smiled at the end. She gave me some pointers for my next pitch and then she said yes! SHE SAID YES!

I nearly skipped out of the room, with an ear-to-ear grin. A sweet older lady at the door stopped me and said, “You’re smiling, it must have went well!” I gave her a thumbs up and danced back to the workshop. The rest of the weekend could have been boring and terrible and it wouldn’t have mattered because somebody wanted to read my story! But the rest of the weekend was amazing and it kept getting better and better. I got a second yes, I went to some incredible workshops taught by professional authors and screenwriters, I had several epiphanies about my book’s plot, fan-girled the screenwriter of one of my favorite films (Gordy Hoffman, brother of the late Phillip Seymour Hoffman), I watched a great keynote from best selling author Diana Gabaldon and got to chat with her for a few minutes while she signed my book, and I felt more genuinely myself than I have in a very long time.

Harbor had her fun, too. My water girl kept finding ways to say “HEY, I’M HERE. TELL MY STORY!” Water soaked everything in my purse, a water bottle splashed all over my face in Hallie Ephron’s workshop, the cover of the writing magazine on the registration counter was deep blue waves, and when I was feeling ready to go home on the morning of the third day, I slipped on water and fell in the shower. It was weird and awesome. I think the universe was telling me something. 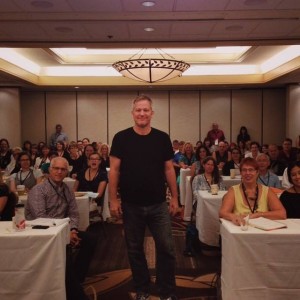 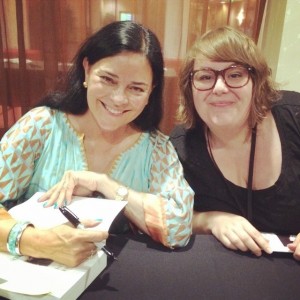 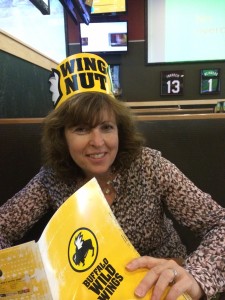 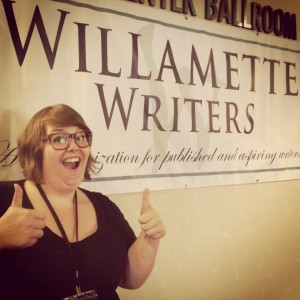 I have always scoffed when people say things like “you’ll know it when you see it” but I just knew it this weekend. I knew that writing is what I was meant to be doing and events like the Willamette Writers conference is where I am meant to be.