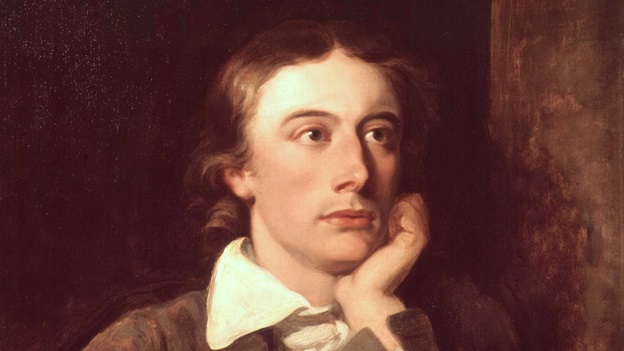 John Keats, poetry, and the romance of a short life –
On burning brightly and finding artistic validation in death

It’s time to revel in some early 19th century English romance with the poster boy of tragedy and posthumous artistic validation.

John Keats, the bright star, was the very personification of a young romantic. He was everything the poet stereotype brings to your mind: boyish, indulgent, fragile, star-crossed, and exceptionally talented.

And perhaps there’s a close association because Keats is so widely regarded as one of the greatest poets of all time. His work and, quite frankly, his tragic death, have influenced so many of poetry’s powerhouse writers, like T.S. Eliot, William Butler Yeats, Lord Alfred Tennyson, and as we learned in an earlier episode, Oscar Wilde.

So why exactly is Keats such a well-loved literary hero? To answer that, we have to travel back to 18th Century Great Britain.

In the middle of London and in the midst of war

John Keats was born in London on Halloween in 1795. At that time, London was in the middle of the First Industrial Revolution and, subsequently, in the early stages of an insane population boom.

When Keats was born, the city was home to three quarters of a million people. Its paved roads and sewer systems were brand new. More and more factories were popping up. The city was starting to take shape as an urban metropolis. By the time Keats died, London’s population had doubled. By the mid 19th century, the population had exploded to 3 million people.

You can imagine the strain that influx of people had on London’s resources. In the same year Keats was born, women were actually going to prison for rioting over food.

But what I believe is the most remarkable thing about this time period is that John Keats was born into revolution and war.

Just a few years before his birth, America had declared independence and George Washington became its first president, the French Revolution began and King Louis XVI lost his head, and England became entangled in a long series of wars with France. In fact, England was fighting with France for almost all of Keats’s life. Napoleon, yeah that asshole, wasn’t defeated at Waterloo until Keats was 20 years old.

But lets go back to October 31, 1795, when our tragic hero was born. Keats was the oldest of five children. His father Thomas Keats worked as a groom in a horse stable that was owned by the Jennings family. Thomas, who was 31 at the time, and the young Frances Jennings, who was 19, were married in 1794. John was born just a year later. He had three younger brothers, George, Thomas, and Edward. Edward unfortunately died when he was a baby. John’s youngest sibling, his sister Franny, was born when he was eight years old.

The family was not wealthy by any means, but they lived a pretty comfortable life. They had enough money to send Keats and his younger brother to school. John and George were sent to a school in Enfield, which was about 15 miles north of London and close to their grandparents home.

A year after starting school, their father was on the way back from visiting the boys and was thrown from his horse. He died from a skull fracture. His father’s death sent John’s life into turmoil.

John’s mother remarried just two month’s after her first husband’s death. That second marriage ended almost as abruptly as it began and the Keats children were sent to live with their grandmother. John was just ten years old when his mother disappeared. These traumatic events pushed John into bouts of depression and extreme anxiety.

At school, he was a fighter and a troublemaker. Keats’s childhood character was described as “always in extremes.” He befriended the headmaster’s son, Charles Cowden Clarke, who remained a lifelong mentor and comrade. He helped Keats in many ways throughout his short life and Clarke was even credited with introducing Keats to Renaissance literature.

When Keats was 14 years old, his mother showed back up in his life. She was sick and dying of tuberculosis. In March 1810, she passed away. This would mark the first family death from the disease, also known as “the Keats family curse.” John had great love for his siblings and felt responsible for them, which might, in part, be why he left school and started an apprenticeship with a surgeon. In 1814, when Keats was 17, his grandmother died, leaving John and his siblings with their appointed guardian Richard Abbey.

Unknown to Keats, the Jennings had left John and his siblings a substantial amount of money in a trust. Instead, the money was untouched and the Keats family struggled with povetry and debts.

The time of his grandmother’s death also marked one of Keats’s earliest surviving poems, “Imitation of Spenser.” It was inspired by the work of 16th century London poet Edmund Spenser.

John Keats continued writing but his focus was on his studies. He studied medicine at Guy’s Hospital in Central London and even received his apothecary’s license but he grew increasingly depressed about his future.

His brother George, once wrote that John feared “that he should never be a poet and if he was not, he would destroy himself.” But for Keats, luck was just around the corner.

His guardian, Richard Abbey was furious. Abbey never approved of John’s passion, but continued to loan him money throughout his life.

Strongly influenced by his new friendship with Leigh Hunt, Keats published his first book of poetry called Poemsin 1817. He was 21 years old.

The book was dedicated to Leigh and contained a collection of long poems and sonnets, including “On the Grasshopper and Cricket,” “To My Brother George,” and “On first looking into Chapman’s Homer.”

Poems was not well received and his publisher was less than happy. Keats then started working with Taylor and Hessey, well-known publishers of poetry and fans of his work.

Through Leigh Hunt and his new publishers, Keats was introduced to a circle of writers and artists, including Percy Bysshe Shelley, John Hamilton Reynolds, William Hazlitt, and Samuel Taylor Coleridge.

After Poems was published, John’s younger brother Tom came down with tuberculosis, so he moved to Hampstead, where he and George took care of Tom.

Around this time, he was introduced to Isabella Jones, a women who was an inspiration for his work and likely his first experience with romantic love. It’s said that the earlier version of “Bright star” was actually written for her.

In June 1818, Keats accompanied his friend, Charles Armitage Brown, on a walking tour of Scotland and Ireland. During this tour, he caught a bad cold and was too weak to continue. He returned home and tended to his little brother Tom. That winter, Tom passed away.

Also in 1818, Keats published a long poem called Endymion that was dedicated to poet Thomas Chatterton. Chatterton had died by suicide at age 17. Critics tore Endymion and Keats a part, saying he should go back to being an apothecary. It’s been said that Keats never fully recovered from this harsh criticism.

Finding himself at Wentworth

With his brother George’s move to America, Keats decided to move to Wentworth Place, which was owned by Armitage Brown. It was at Wentworth that he wrote some of his most famous works, “Ode to a Nightingale,” “Ode on a Grecian Urn,” “Ode to Psyche,” “Ode on Melancholy,” and “Ode to Indolence.”

Wentworth held even more significance because it was the place where Keats was introduced to Fanny Brawne, the woman who would later become his fiancée, and admittedly, his obsession.

Before his brother Tom’s death, they had met when Fanny was visiting Wentworth. Eventually, Fanny and her mother moved into Wentworth. John and Fanny spent every day together and in June 1819, they reached an informal agreement to be married. John continued to struggle financially and felt he had little to offer her.

Unfortunately, in parallel to his overwhelming love affair with Fanny, Keats was also experiencing the all-too-familiar symptoms of tuberculosis. His coughing and hemorrhaging got increasingly worse.

In July 1820, the last volume of his living work, Lamia, Isabella, The Eve of St. Agnes, and Other Poems was published with a better critical reception than his earlier works.

That fall, his doctors told him that his life depended on a move to a warmer climate. He set off for Rome in November. On the ship to Italy, he made his last revisions to “Bright Star.” He stopped writing to Fanny, knowing he would never return to London.

In Rome, the medical treatment he received contributed greatly to his suffering and rapid decline. He was bled and starved. He requested pain medication, but was refused for fear of him committing suicide.

On February 24, 1821, at just 25 years old, John Keats took his last labored breath. Before his death, he requested that his tombstone not include a name, just a simple phrase: “Here lies one whose name was writ in water.”

The impact of a short life

His death greatly affected his friends and other writers. Percy Bysshe Shelley wrote a poem in his honor called “Adonais.” Later in life, he drowned in a boating accident and when Shelley’s body was found, the only thing in his pocket was a book of Keats poetry.

During his life, Keats struggled to sell his work, barely selling a few hundred copies of his books. However, in the centuries since his death, poems like the “Odes” have been hailed as masterpieces, he has become a staple in literary education all over the world, and influential libraries like Harvard and the British Library has clamored for his work.

There are several memorials dedicated to Keats, including the Keats House in Hampstead and the Keats-Shelley Memorial House in Rome. Keats is woven into the fabric of the modern world; his influence is everywhere. Even now, when rising talents die at an early age, like Jimi Hendrix and Kurt Corbain, it is famously referred to as “joining the Keats club.”

Bright star, would I were stedfast as thou art —
Not in lone splendour hung aloft the night
And watching, with eternal lids apart,
Like nature’s patient, sleepless Eremite,
The moving waters at their priestlike task
Of pure ablution round earth’s human shores,
Or gazing on the new soft-fallen mask
Of snow upon the mountains and the moors —
No — yet still stedfast, still unchangeable,
Pillow’d upon my fair love’s ripening breast,
To feel for ever its soft fall and swell,
Awake for ever in a sweet unrest,
Still, still to hear her tender-taken breath,
And so live ever — or else swoon to death.

Keats died a slow, painful death, taken by the disease that took his mother and his younger brother. His short life was sad. Tuberculosis was an extremely common way to go at the time. Autopsies done in Europe in the early 1800s found that more than one-third of deaths were from TB.

To me, that is what makes “Bright star” even more impressive. Here was a man who was incredibly aware of his own mortality. He had witnessed first hand what his own death would be like.

Think about the last lines of the poem, “To feel for ever its soft fall and swell… to hear her tender-taken breath.”

Think about how much breathing freely must have meant to Keats. To breathe with ease, without coughing, without blood, without chest pain, fatigue and fever. To see in someone, like Isabel or Fanny, the beauty and timelessness of youth and, more importantly, of their health. What a powerful sentiment. And what a tragic observation to make while counting your last days.

To me, “Bright star” transcends beyond just a love poem. It’s more than that. It is a poem of flesh, of temporality, of awe, of envy, and at the same time it is the most indelible collection of words I can think of. That cross roads of yearning and mortality will never go away.